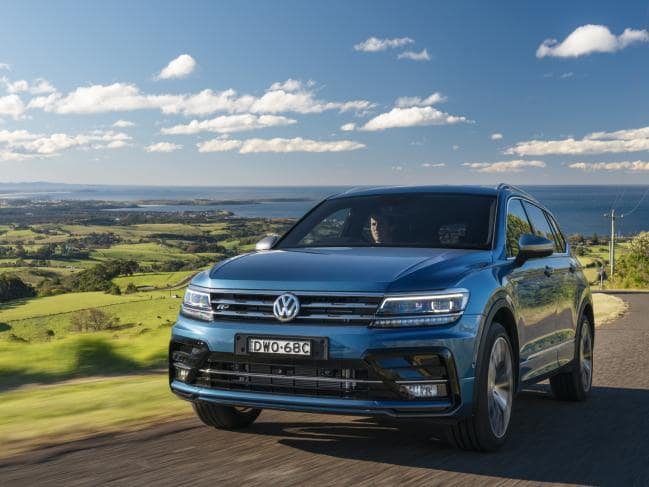 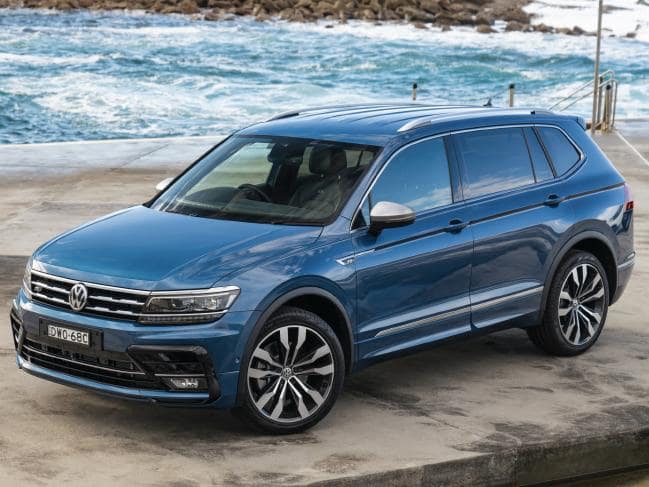 Our family of four decides whether bigger really is better in the range-topping Allspace 162TSI Highline with R-Line pack.

JULES: VW knows how to make a desirable looking SUV. This Tiguan is a knockout.

IAIN: Tiguan Allspace, actually. Can you notice the difference?

JULES: Not really. I assume with that name it’s bigger?

IAIN: Yep. 215mm longer than a normal Tiguan and with 109mm extra wheelbase. 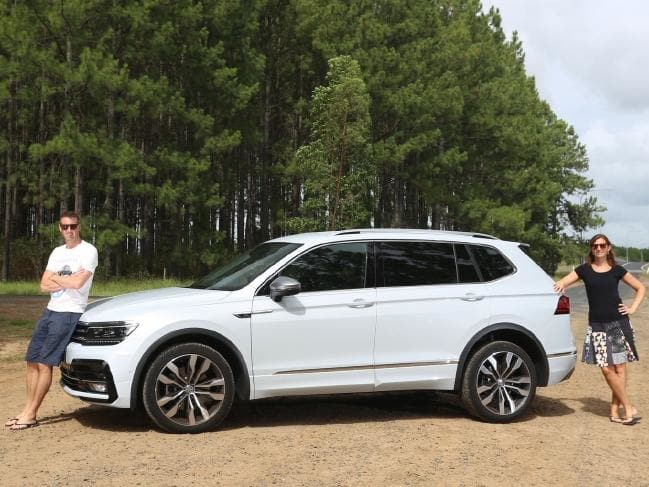 JULES: Making it big enough to turn a five-seater into a seven-seater?

IAIN: Precisely. The Allspace is a more practical Tiguan with two extra seats and a larger boot for 500 more than the equivalent five-seater. Which seems reasonable.

JULES: The rest’s the same?

IAIN: Not quite. As the Allspace was designed with Americans in mind they’ve given it a more truck-like slabby front end above the chrome grille. Not as sleek as a regular Tiguan.

IAIN: Thanks to ours being the range-topping 162TSI Highline, 2,990 before on-roads. It also has VW’s R-Line pack, adding 900 for 20-inch wheels, sportier bumpers, side skirts, rear spoiler and gloss black trim.

JULES: It may cost 0,000 but sit inside and it feels like money well spent.

JULES: There are nice flashes of sportiness. 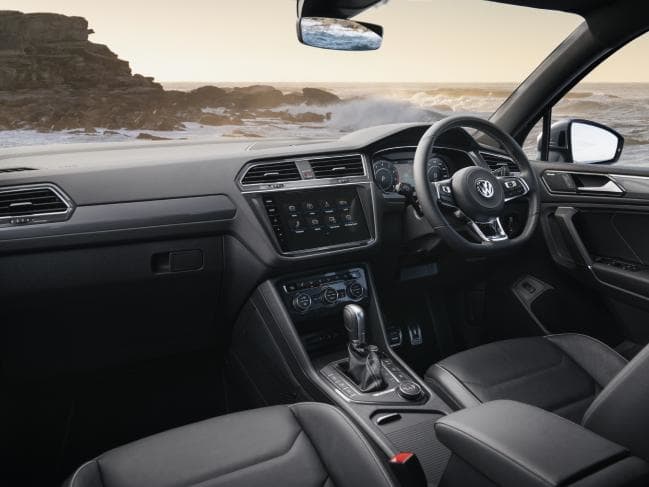 Leather trim: Allspace, as tested with R-Line pack, is just shy of 0KSource:Supplied

IAIN: Steady. It’s not quite in that league. VW calls it their Active Info Display: a 12.3-inch screen showing your vitals and such things as navigation or audio.

IAIN: Sadly not but for 900 it’s worth it. It’s part of a Sound and Vision pack, including a Dynaudio sound set-up and 360-degree camera.

JULES: There’s ambient lighting but it could be a bit brighter.

JULES: This is no lazy family SUV — it really shifts.

IAIN: Same engine as the Golf GTI but with 162kW rather than the hot hatch’s 180kW.

IAIN: Leave it in Normal mode and it’s really tardy to respond.

JULES: I wouldn’t know, I always had it in Sport mode. 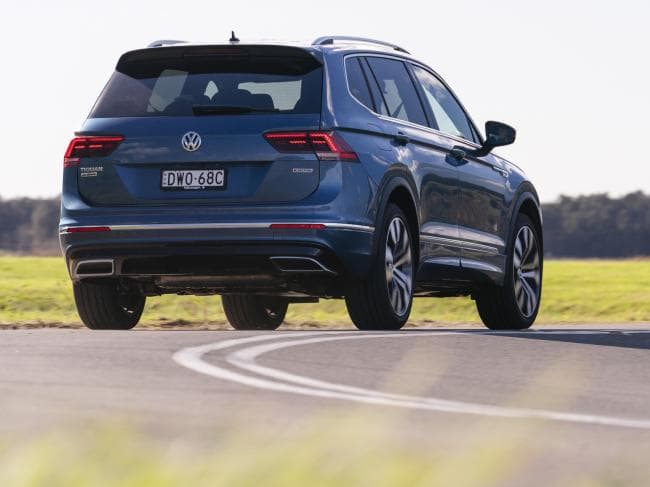 It gets along: Tiguan Allspace uses Golf GTI engine with slightly lower outputsSource:Supplied

IAIN: Hence why it drank so much petrol. Turbo diesels are more common for seven-seaters but it’s nice to have the VW’s petrol zest. Still, it takes premium unleaded so you pay for it at the pump.

IAIN: It doesn’t feel like a huge SUV. Any bigger and it would feel cumbersome but the Allspace disguises its bulk well.

JULES: The boot in a normal Tiguan isn’t that big but the Allspace’s is a whopper.

IAIN: Keep the third row of seats folded and you get a massive 700L. Even with seven seats up there’s 230L to fit shopping bags, or a set of golf clubs.

JULES: A foot swipe under the rear bumper fires the auto tailgate. Love that.

IAIN: The cargo space needs some sort of rear lip though. I pre-opened the auto tailgate and some shopping rolled out while I watched helplessly. Embarrassing.

JULES: With this engine, the Allspace doubles as a proper sporty SUV.

IAIN: If I’m being picky it doesn’t feel quite as nimble as the normal Tiguan 162TSI, mainly thanks to the extra 130kg. With all-wheel drive, Sports mode and that willing engine it’s still a talented thing.

JULES: The kids get their own tray tables, temperature controls and heated seats in the back. They’re pretty spoiled.

IAIN: You’re not so spoiled if you’re in the third row though. VW doesn’t hide the fact the Allspace is really a 5+2. The third-row seats are small, really upright and not at all comfy for adults. 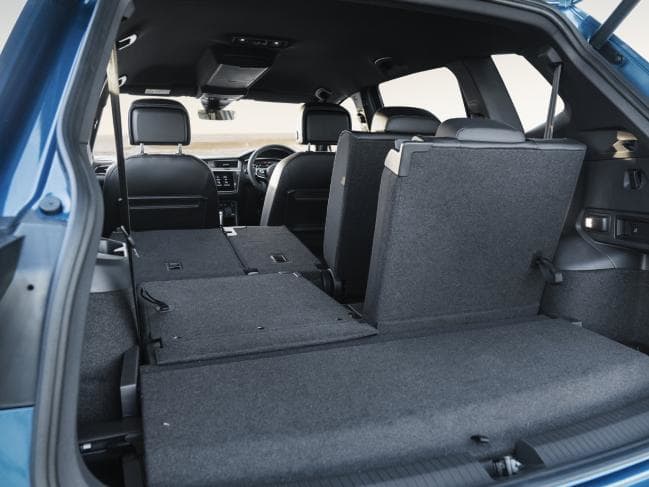 Strictly a 5+2: Third row is for smaller occupantsSource:Supplied

JULES: They’re fine for smaller kids, plus you can slide the middle seats forward for more space. The two rear seats fold easily with the tug of a strap.

IAIN: Safety kit is top notch, with the full suite in our Highline. The lane assist, which pulls you back into line, is among the best I’ve tested, really subtly making adjustments for you.

JULES: And VW now has a five-year warranty?

IAIN: Yep. Good move there. It makes ownership more reassuring but service charges are still higher than some key competitors.

Jules: “It has all the goodies.” Iain: “Up there with the best seven-seaters.”Source:Supplied

JULES: I really enjoyed the Allspace. I know it has all the goodies as the range topper but it feels really premium and sporty to justify its price.

IAIN: It’s ideal to have the choice of five or seven-seat Tiguans. Our family would get by with the former but I’m impressed with the practicality of the Allspace. That and the performance, handling, style and finish means it’s up there with the best seven-seaters.