Step aside, Super Soaker, the Spyra One shoots water bullets 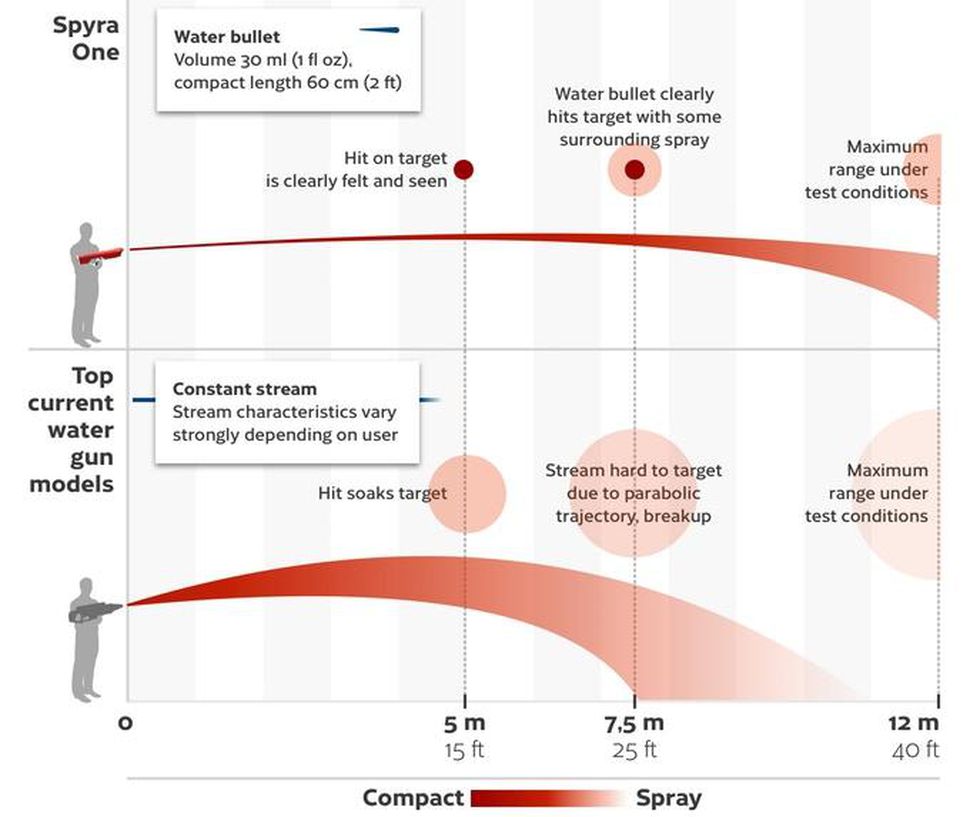 If you were a kid in the ’90s you probably remember the reign of the Super Soaker. The plastic neon water guns would bring incredible joy (or fear, depending on the wielder) on hot days. But that was two decades ago, and water guns haven’t changed too much since.

With the Spyra One, they could get the upgrade they deserve. The Spyra One has an internal motorized pump that pressurizes water to shoot out 25 streamlined ‘water bullets’ per tank, which the company argues travel farther and hit harder than a Super Soaker-style stream.

Each time you pull the trigger on the Spyra One it shoots out a 30 ml/1 oz water bullet (about the size of a shot glass). Because of the shape of the water bullets, Spyra says they can hit targets accurately up to 30 feet away.

Here’s a handy chart provided by the company:

And when you run out of ammo, you can dip the barrel of the Spyra One into water to automatically refill and repressurize in 14 seconds. No more hand pumping or waiting forever to refill like the Super Soaker days.

The Spyra One also has a mini display to tell you how many shots you have left. The gun recharges through USB-C.

The Spyra One is currently on Kickstarter with only a few days left in the campaign. Right now, the campaign has passed 85,000 in funding, which is way past its initial goal of 9,485.

Since this is a Kickstarter campaign, there’s no guarantee that this is or will become a real product. But Spyra says that it’ll start shipping out the Spyra One to Kickstarter backers in July 2019 with retail set at 75 (about £135/AU44). So you may have to wait until next summer to try it out.